With the start of the new year, I wanted to look back and reflect on some of my favorite shots from 2017.  The year was full of travel, with thousands of miles put on spanning between Nebraska, Colorado, and Wyoming.  My focus this year was definitely on my home state, but taking some time to visit the striking landscapes of my neighboring states was definitely a bonus!

So, in no particular order: 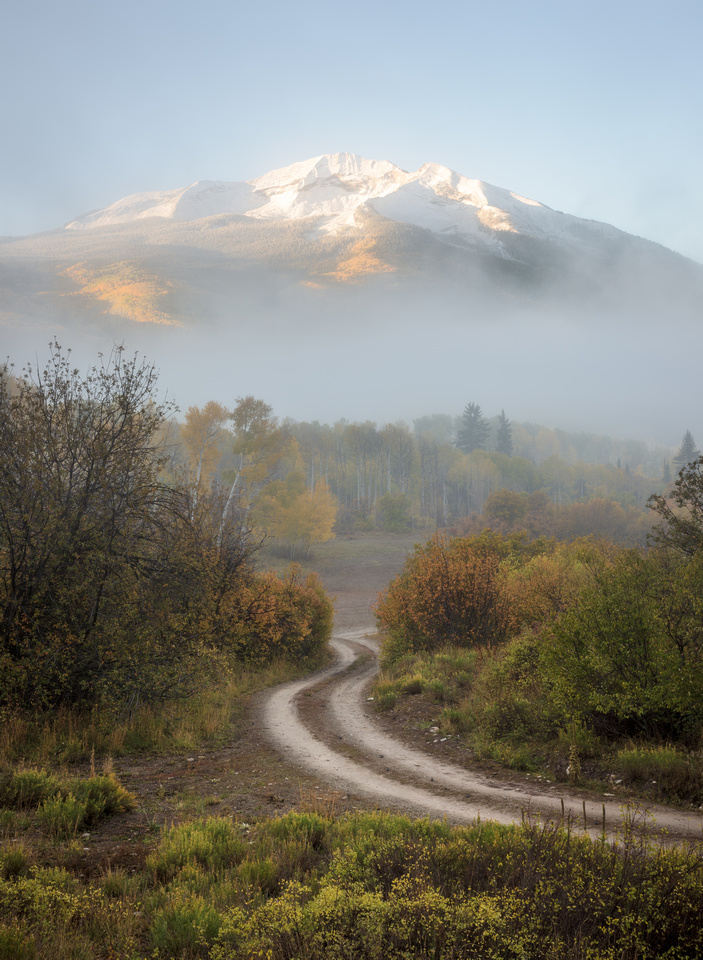 During the first week of October, my girlfriend, dog, and I spent a week exploring the southern Colorado Rockies.  Early October is a bit late to catch Aspen trees still holding leaves on the Front Range but we timed it perfectly to see a great show further south near the towns of Telluride, Crested Butte, and Ridgway.  This was really the first time I've devoted a good chunk of time to experience Fall in the mountains, and I have to say it was an awesome experience.  Not only were the aspens beautiful shades of yellow and golds, the smaller scrub oak bushes were also vivid golds and reds and filled in the voids between the taller trees.  I'd like to make it a point to visit the Rockies every Fall from here on out.

This photo was taken specifically at Kebler Pass, where we spent two nights, once at the beginning of the week and the other at the end.  Out of all the locations we visited, this area was definitely at the most "peak" of Aspen color.  This small path is located just off the main pass and created a perfect leading line to the distant peak.  The fog and light breaking through to the aspen veins on the mountainside pulled the scene together perfectly. 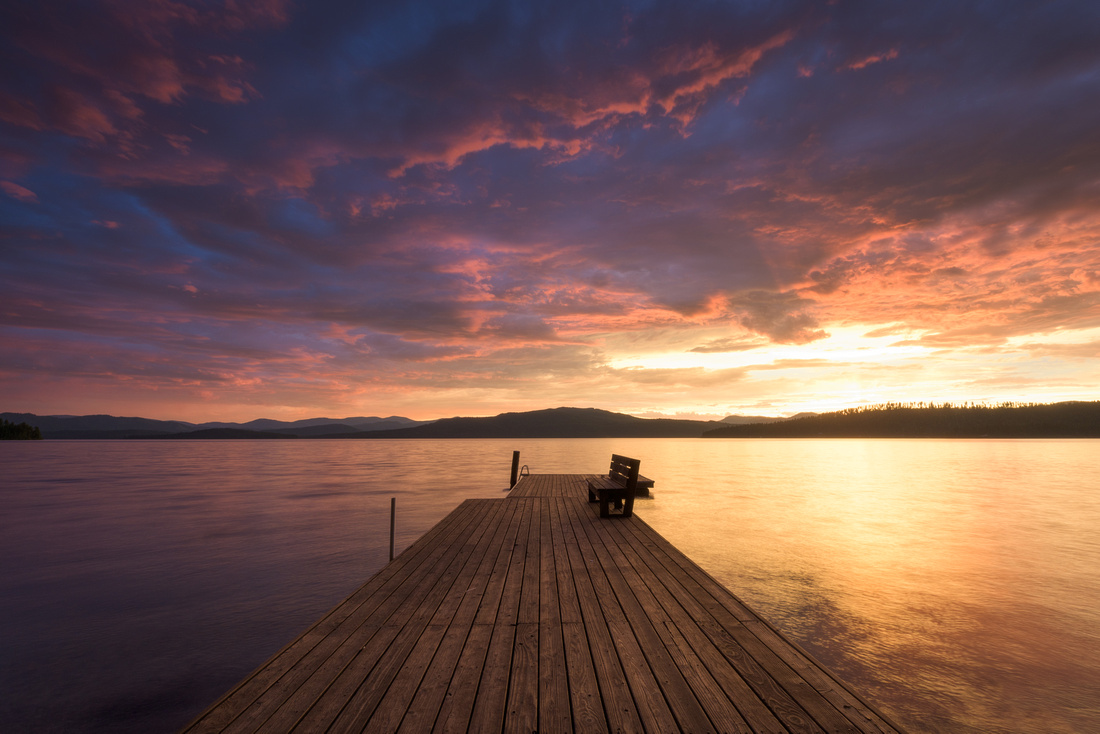 It seems like much of my family is migrating to the Pacific Northwest, with my brother living in downtown Seattle and my sister in Spokane (WA).  As such, my sister was familiar with this scenic lake in northern Idaho and it was decided that it would be a great location for a celebration of my dad's 70th.  My immediate family stayed in a cozy little cabin right on the lake's edge and we had several days to simply hang out and enjoy the crystal clear waters.  On our last evening there a passing storm left these incredible colors burned into the sky as the sun went down.  Being so far north, the sun stays in the sky for quite a bit longer during the summer months - which allowed us to enjoy the beautiful colors for much longer than I'm accustomed to. 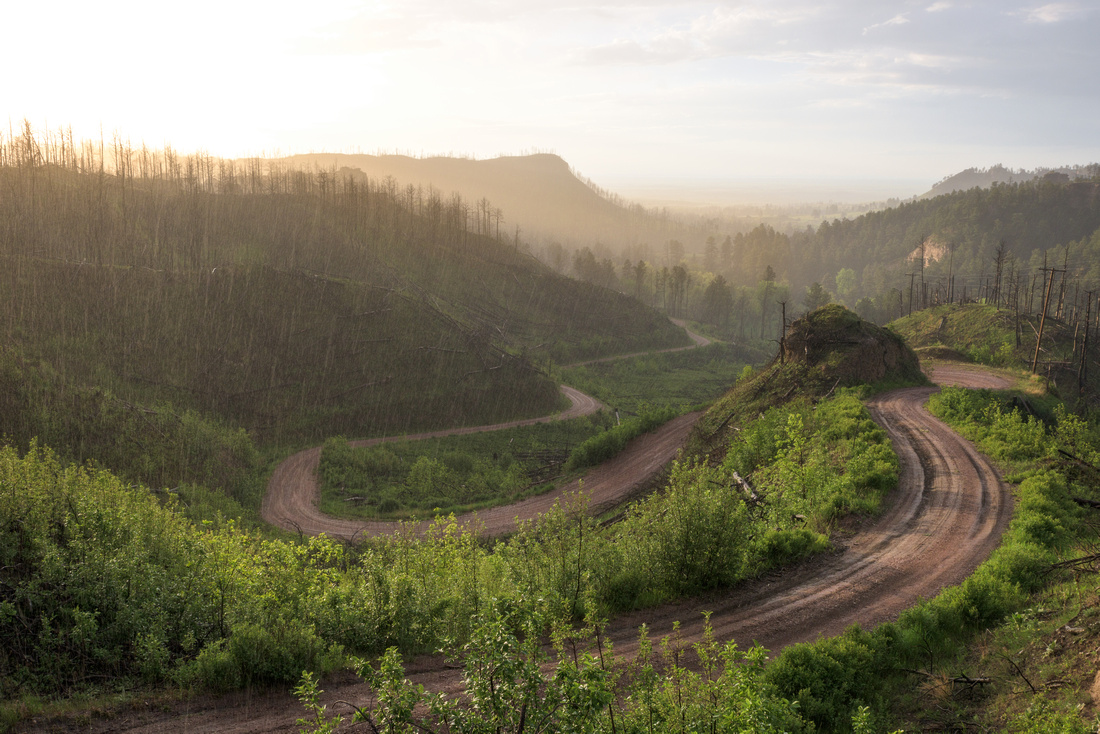 This winding forest road is located in the Pine Ridge area, situated way up in the northwestern corner of the Nebraska panhandle.  I captured this shot by hiding my camera and body under a camouflage wildlife blind (essentially a large piece of cloth which was the only type of cover I had on hand), and occasionally popping out to press my shutter.  Somehow, I managed to keep my lens dry as the rain moved through the valley.  It was quite the experience as the rain created a veil over the landscape and a bright rainbow shined across the sky to my back.

On a side note, this photo secured a 1st place in its category in this year's NEBRASKAland magazine's photo contest, details will be in January's edition. 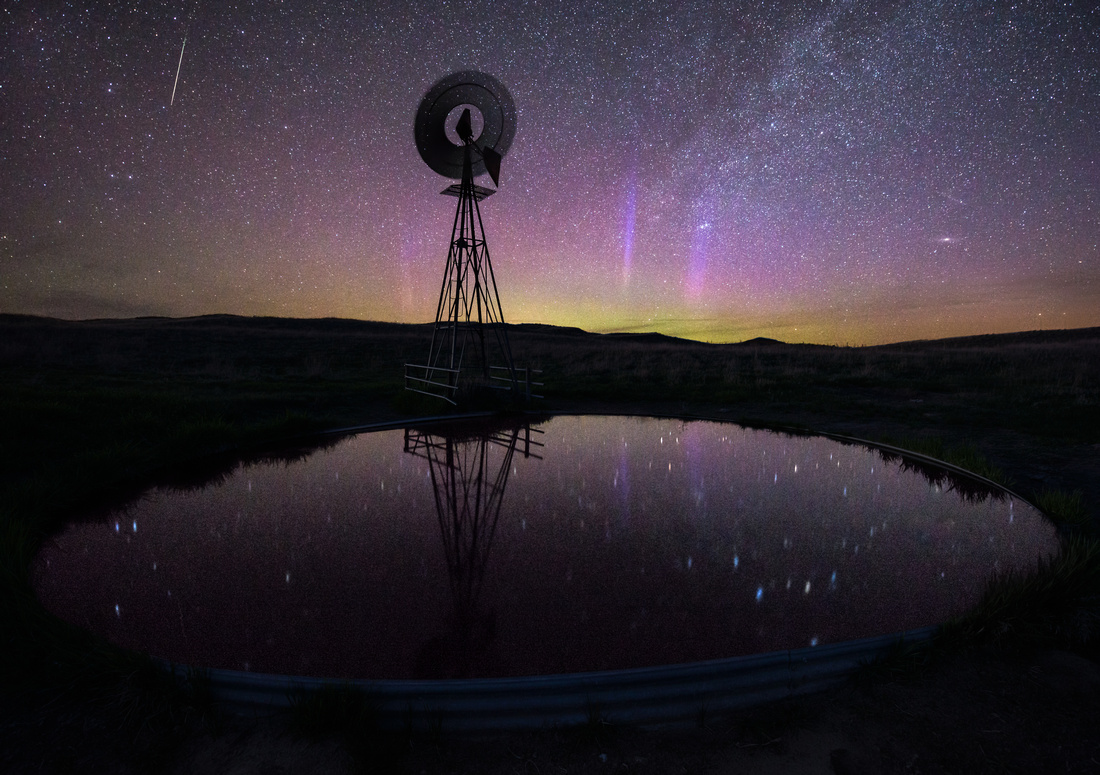 Here is a shot I caught mid-summer near the town of Valentine in north-central Nebraska.  I had planned this photo during a previous trip there, and knew that this northward view would be perfect to capture the northern light's reflection in the windmill's tank.  By checking the forecasted KP index, it's possible to get an idea if the northern lights are possible over the next 2-3 days (A KP of 5 or more is needed).  Even then, it's mostly just chance if the lights will be visible this far south.  That being said, I noticed on a Thursday evening that the KP that weekend was going to be elevated so I left town the following day.  I got into position late in the evening and set my camera up to take photos automatically through the night... sure enough as I scrolled through the memory card the next morning I found a couple keepers from the 64 GB my camera recorded.  And by a second stroke of luck, there was also a meteor visible in the shot. 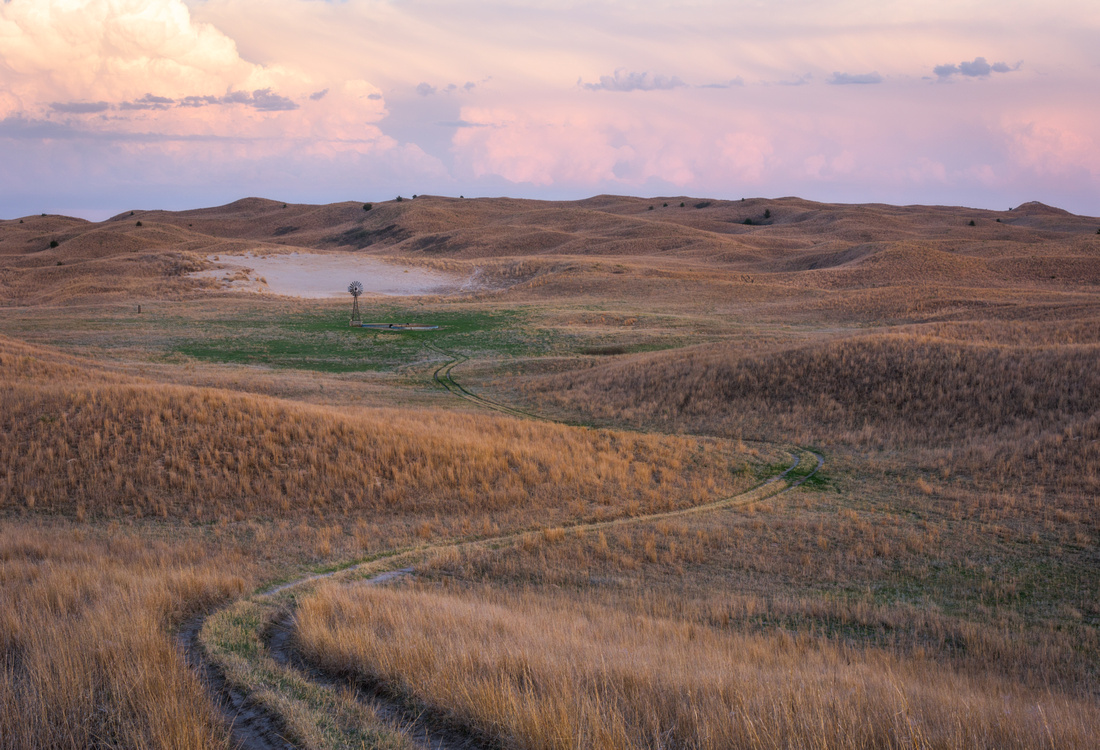 I found this curving path on public land near the town of Thedford, Nebraska.  I love exploring these routes that are cut through the endless Sandhills - 4WD is definitely a necessity!  This location is also one of my favorite camping spots before heading further west... it's scenic, the night sky is incredible, and you are absolutely guaranteed to not meet another soul.  It seems like every summer night I've been here I have seen lightning on the horizon - probably due to being able to see for miles and to the sky being so dark which allows any source of light to travel from afar. 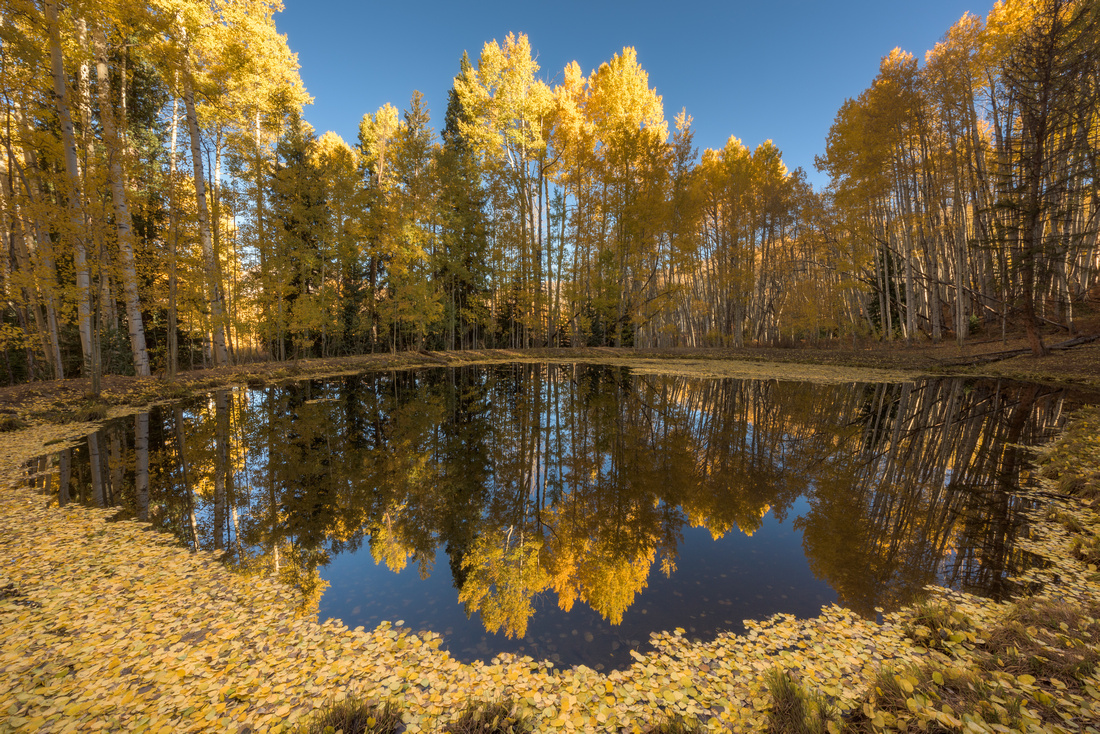 This is another shot from Kebler Pass, which was taken on the last morning there before heading home.  The area is full of little side dirt roads, which were muddy messes due to the recent rainfall.  Deciding to put my truck's four-wheel drive to use, we took one of the side roads that seemed particularly inviting.  My Toyota made it through like a champ and at the end of the path we found this beautiful pond surrounded by vibrant Aspens.  The reflection was perfect, with the fallen leaves creating a perfect border along the perimeter. 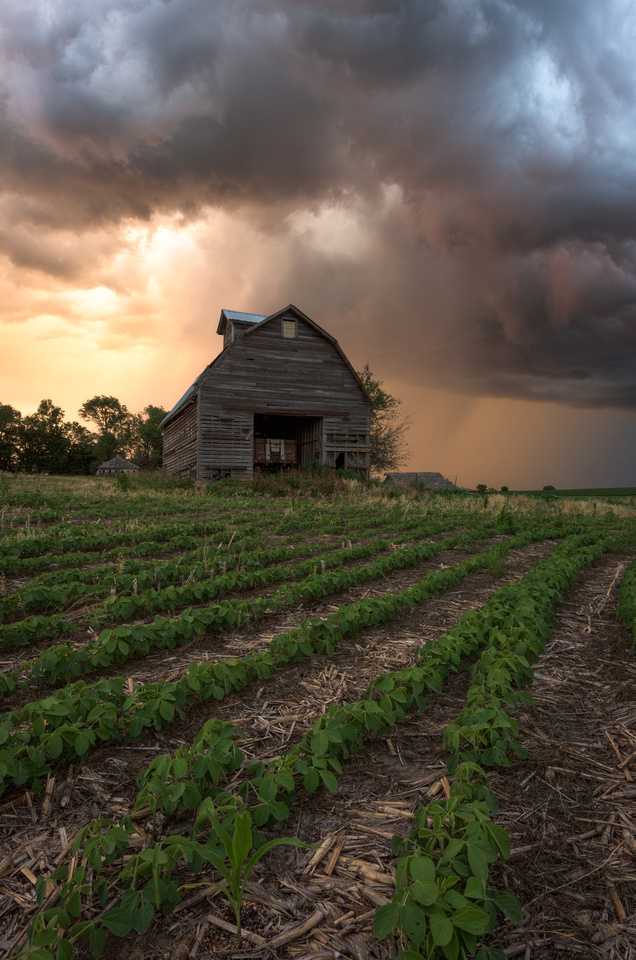 Lots of times, if I'm sitting at home and a storm rolls in near sunset, I'm out the door in a heartbeat.  Nothing contributes to better light at sunset than passing weather.  This image was taken in such a scenario.  I left my house and drove southeast until I found this barn near the town of Elmwood.  I waited a bit and sure enough the setting sun made the clouds above the barn burst into color.

It's usually hit or miss if I'll walk away with a good shot in situations like these.  Trying to find a good subject will leave me running around like a chicken with it's head cut off, but on those occasions that the subject matter AND light work together make it all worth it. 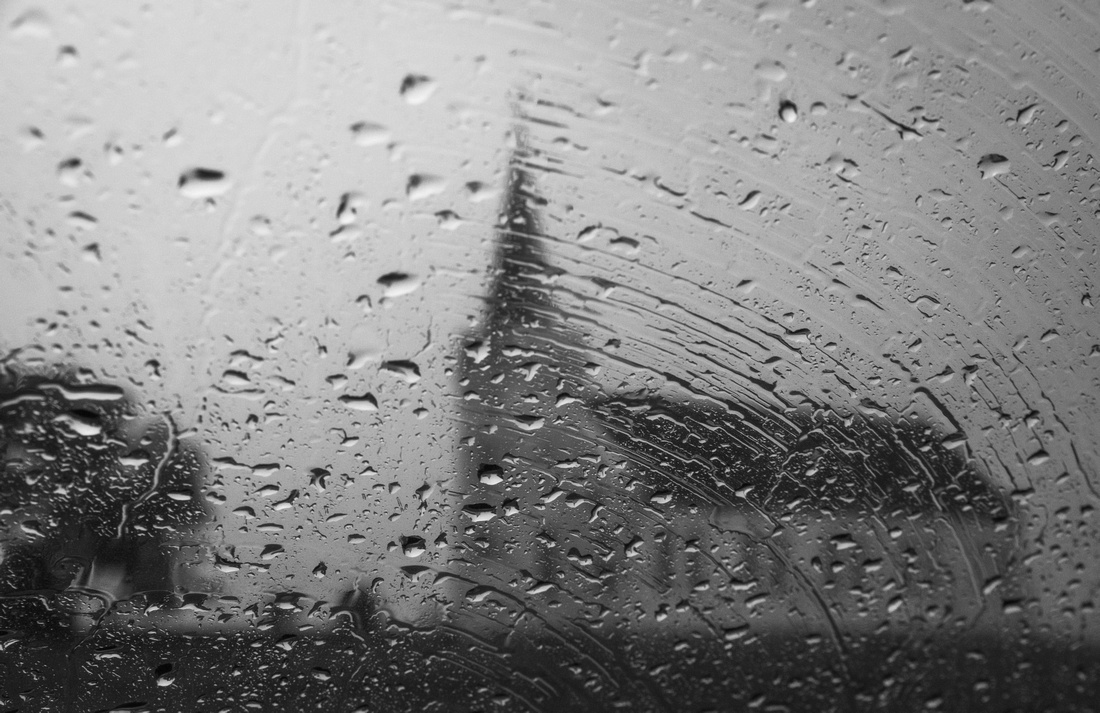 Without a doubt, this abandoned church is one of my favorite subjects to photograph in Nebraska.  It's located all alone down a nondescript gravel road, miles away from the nearest town.

The church itself is about 2 hours from my house, so it's always a gamble if conditions are going to be right.  To the point I made in the previous caption, this photo was the result of storm not quite working in my favor.  The sun's light did not break through the clouds.  However, I decided to work with what I had and took a shot from behind my windshield as I waited in my truck, which led to this somewhat abstract photo. 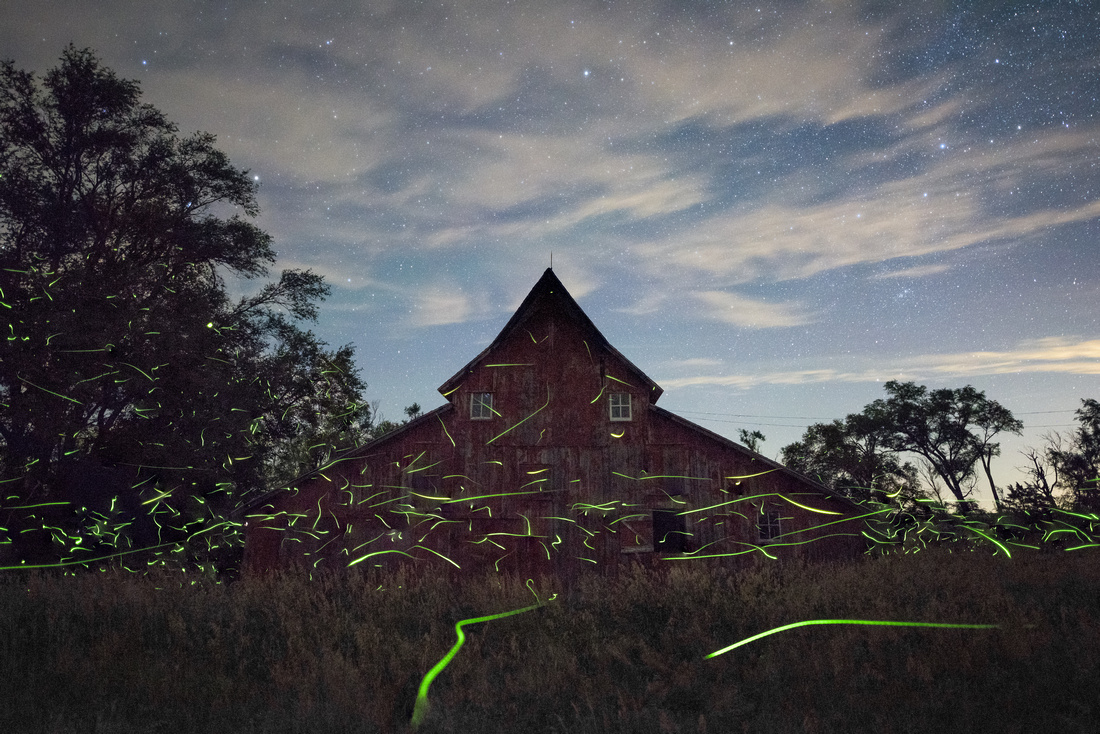 One of the reasons I enjoy photography is that it allows for such a degree of creativity.  In this case, I combined around 40 exposures to create a layering of the paths of hundred of fireflies over the course of several hours.  Combined with the backdrop of this old barn, it really creates an image with a degree of mystery.  Maybe not a wall hanger.. but it might make a good book cover at some point down the road? ;)

As a side note, I was actually here because there was once again an increased chance for northern lights, and this view was perfectly centered looking north.  No auroras that night. 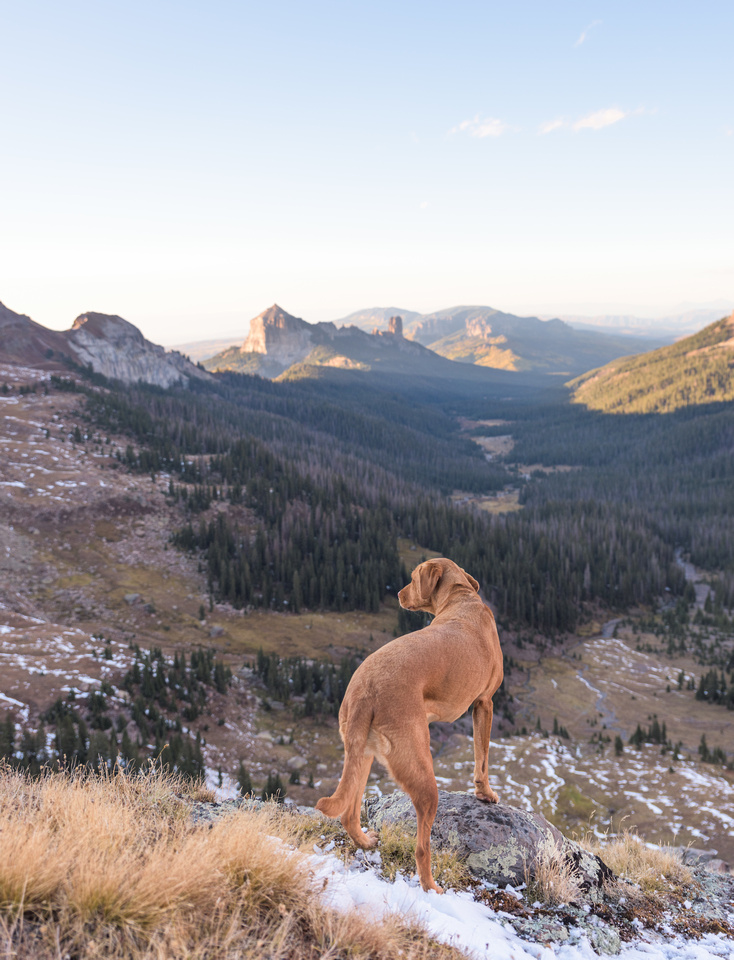 Everyone that knows or follows me likely knows my dog is always with me.  So it's no surprise that this shot from our hike at Owl Creek Pass tops the list as one of my favorites from last year.  Funnily enough, I was hoping to find a view that I had seen of a beautiful valley covered in Aspens, and I thought this hike had to be what led to the overlook.  5 miles in, we realized we were nowhere near the view I had seen, and to add insult to injury, the following day we discovered that the view I was searching for was just a half mile hike from a parking lot.  You live and you learn!

Thank you for taking the time to scroll through.  The blog format is something I'd like to continue.  Please let me know your impressions or thoughts in the comments below.

Duane Klipping(non-registered)
#7 is not a barn but a corn Crib. Slatted sides indicate this as it was built to allow air to naturally dry the ear corn it contained. Just an FYI.
Derrald Farnsworth-Livingston ~ Journey Of Light Photography
Erik, great collection of imagery. "The Unveiling" is my favorite and "Auroral Reflections" is a close second. I wish you only the best light in 2018!
Essay Jay(non-registered)
I just love each picture, and the story behind each one. Fascinating.
Amy(non-registered)
Of course I love the Priest Lake shot!!
Laura(non-registered)
I love your work and it is an inspiration to me as I continue to learn and grow in photography. One of my goals is to capture and share the beauty of the Midwest. One of my favorite shots that I took in 2017 is of the Wilson Church near Schuyler. We went up for sunset (which didn't deliver) but I couldn't leave empty handed. I found a wildflower and set that as the foreground subject with the church in the background. You can see it on Instagram where I post as @lolasblest. Thanks for sharing the story behind some of your images and I can't wait to see what you capture in 2018!
No comments posted.
Loading...
Subscribe
RSS
Recent Posts
Sand-barred From Society My Top 10 Favorite Photos From 2017
Keywords
Nebraska Photographer Blind Great Plains Kearney Local Migration Nikon Photography Sandhill Cranes
Archive
January February March April May June July August September October November December
© Erik Johnson Photography
User Agreement
Cancel
Continue