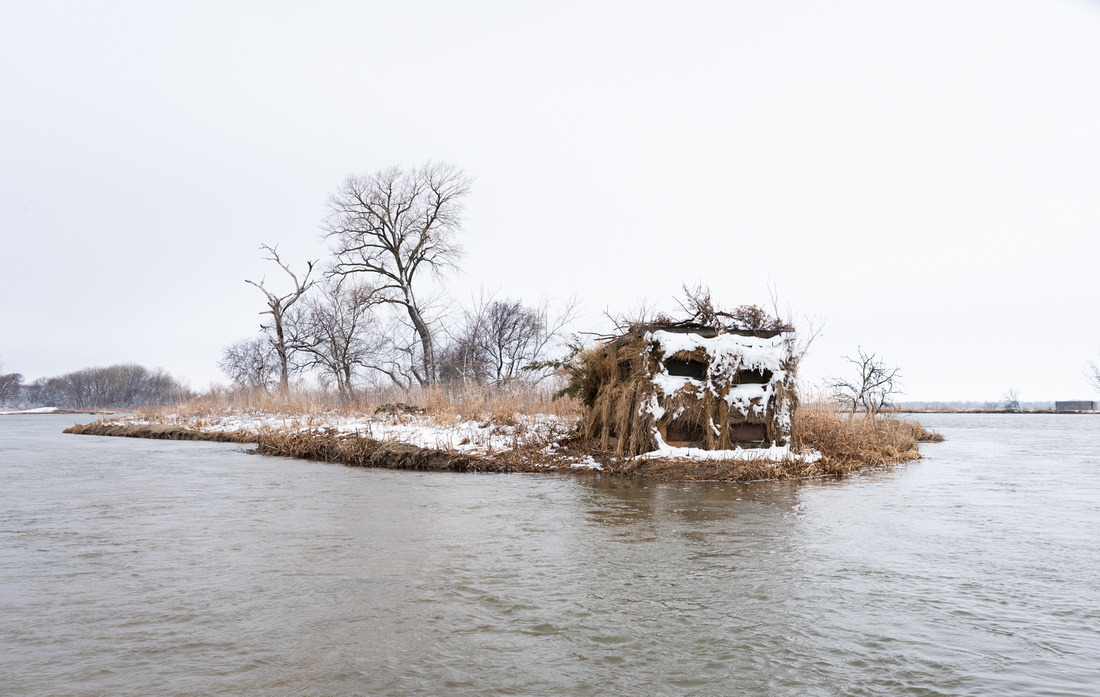 Amidst the coronavirus concerns and social distancing orders in place to help mitigate its spread, I decided to spend a weekend in mid-March at the most fitting location I could think of: a lone photography blind perched on the edge of a sandbar in the middle of Nebraska’s Platte River.

Chad Gideon, owner of Crane Cabin Retreat, and Eric Fowler, NEBRASKAland Magazine Author and Photographer, constructed the blind to provide an up-close encounter to the annual sandhill crane migration that occurs each spring on a stretch of the river near Kearney, Nebraska. An estimated 80% of all cranes on the planet converge at this bottleneck before continuing north to their nesting grounds, the same ritual they’ve repeated for thousands of years. While most blinds at the river’s banks provide a 180 degree view at best, this blind allows for a unique viewing experience as cranes fill in from nearly all sides.

Historically described as being a “mile wide and an inch deep” – crossing the river does require a good pair of waders as water depths more realistically range from ankle deep to waste deep, depending on the chosen route. Ripples on the surface are a good indicator that the sandy bottom is not far off – smooth waters signal one might need to be more cautious with each step. To bring supplies to the blind, the night’s necessities must be loaded into a small sled that can be portaged across the river. For me, this included my camera equipment, sleeping bag and blanket, cooler, and enough propane bottles for a small heater to help take the edge off the cold night. 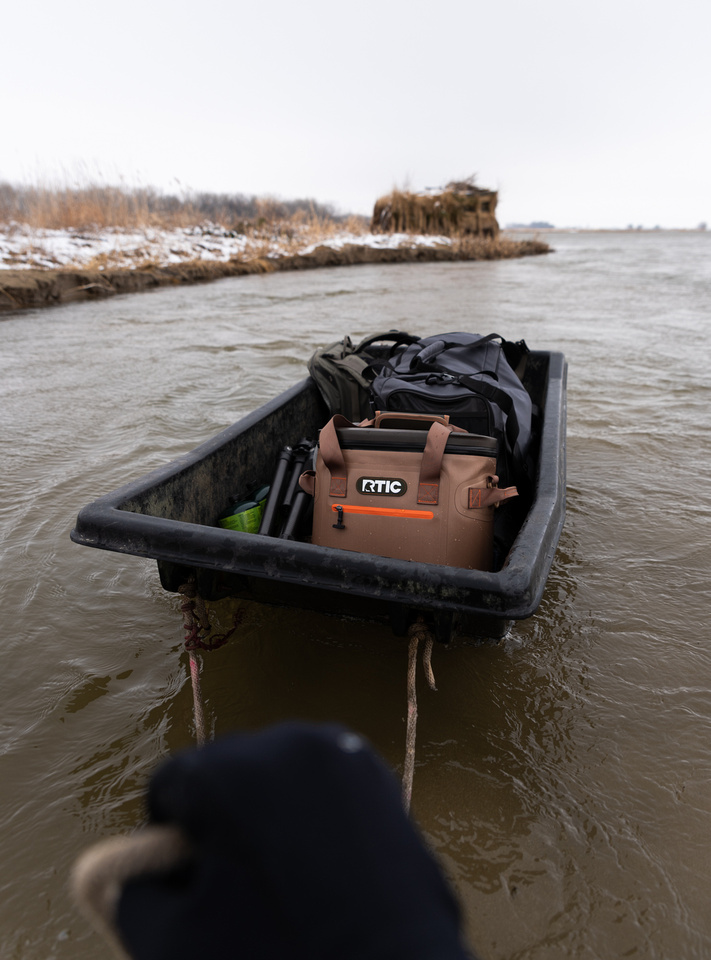 Upon reaching the sandbar I transferred the contents of the sled into the blind and hid the plastic shell among the island’s vegetation. The birds are weary and skittish at this point in their migration and will avoid landing near anything that appears out of the norm – thankfully the blind itself is covered in a heavy camouflage of grasses.  I hunkered down, cracked open a beer, and waited for the show to get started. 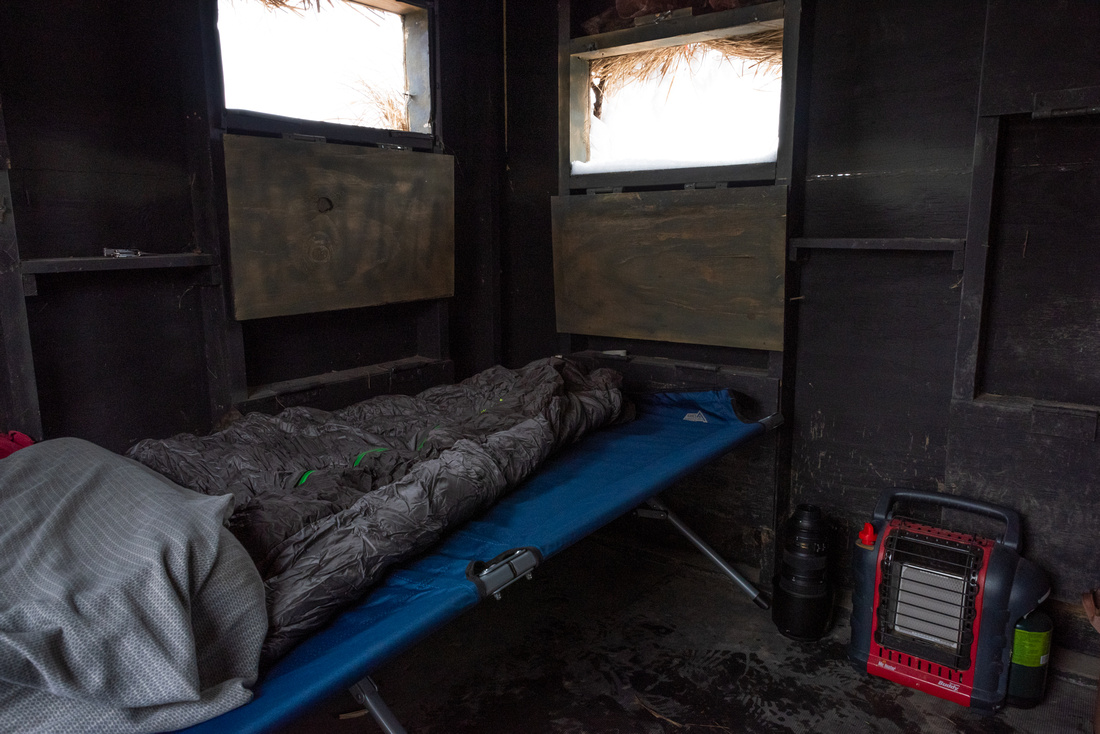 A Mr. Heater "Buddy" - the second most important piece of gear after a camera 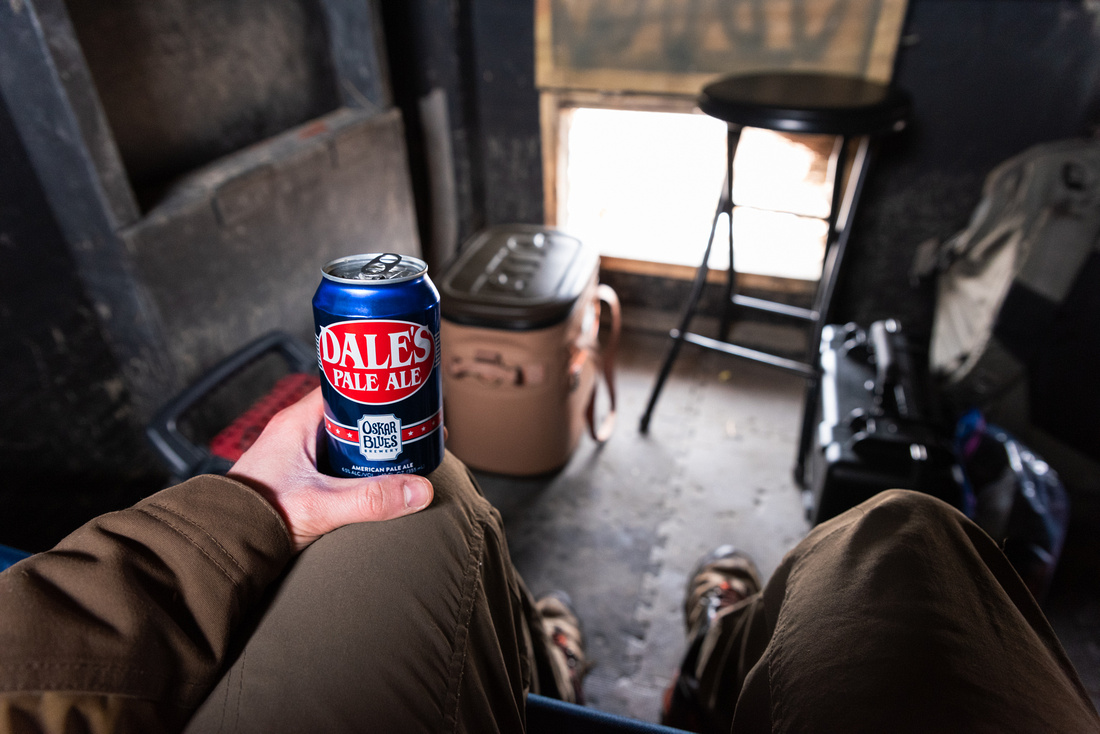 This particular evening was overcast, with a wet snowfall from the night before still clinging to the trees on the shoreline. The birds began congregating on the river as the light faded, first starting several hundred yards downstream and eventually working their way towards the blind. A crane’s approach to the water’s surface is oddly captivating as they drift downward and position their skinny legs out in front, as if deploying landing gear and preparing for impact. 1 by 1, tens by tens, thousands by thousands, they gather in the shallows where they will remain standing throughout the night. By dark, birds had filled in within 15 yards from the blind to the north and east. My ears were filled with their calls, a grand symphony perfected over millions of years. 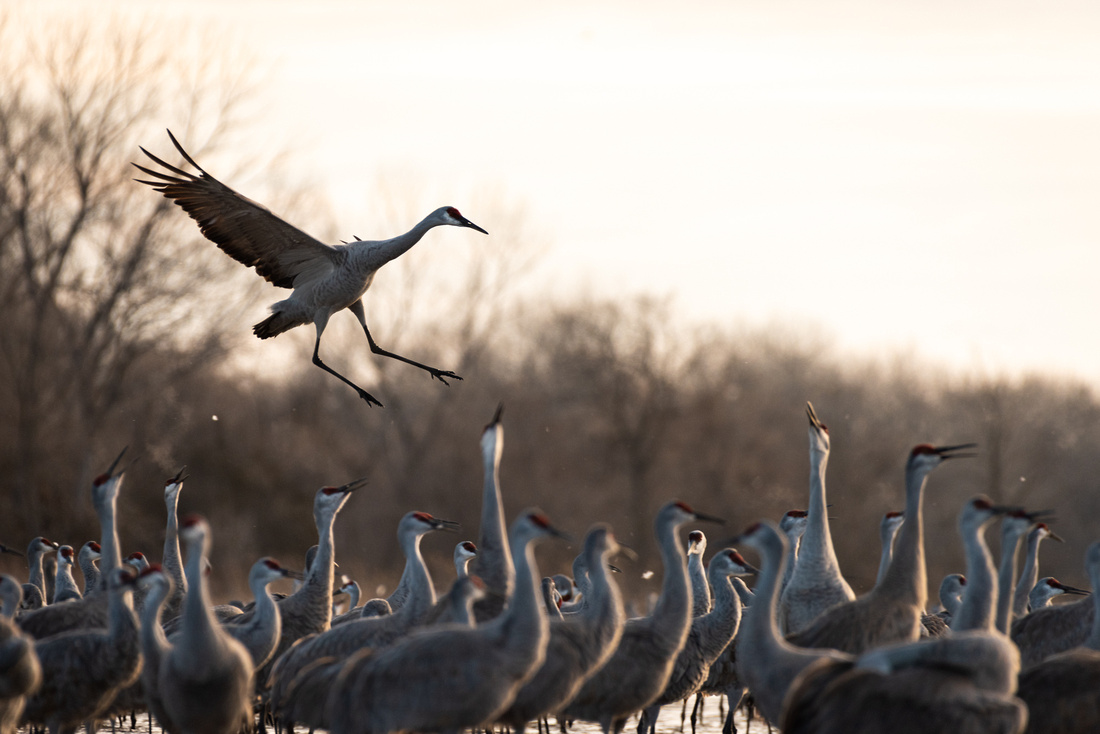 Legs extended, a crane braces for impact on the riverbed

I’ve noticed a few things about the behavior of cranes while spending evenings along the Platte. To some degree, their distinctive, rattling calls continue through the entire night. It seems that groups take turns chattering – presumably to keep watch as others take time to rest their heads and catch some sleep for the day ahead. Occasionally you’ll notice an abrupt end to their calls followed by the turbulent roar of hundreds of wings as a group takes flight. Perhaps a coyote was spotted at the river’s edge or maybe a great horned owl took perch too close for comfort. Some things remain a mystery in the dark of night. 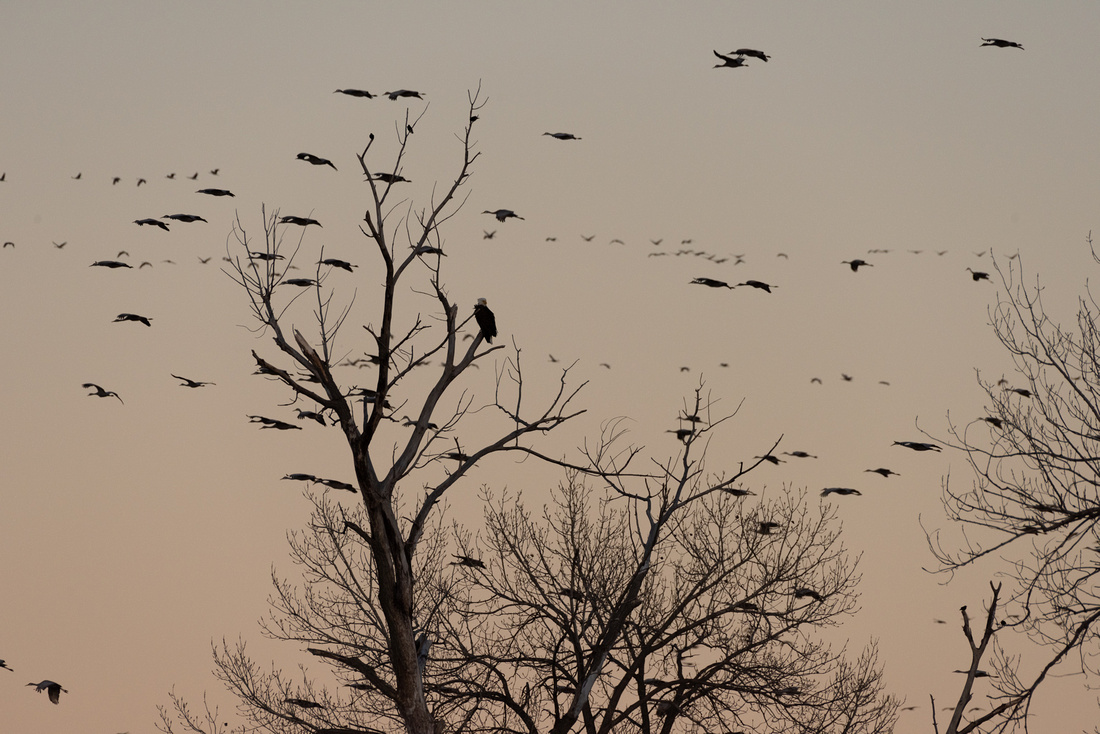 The next morning is when I really had the chance to fire up my camera. As light filled the riverbed, I rested my telephoto lens on one of the blind’s window edges and observed the mass of birds no further than a feather’s drift away. Each bird has its own personality – some are busy pecking at the water for a drink, some meander from group to group, a few playfully interact with each other as part of their courtship dancing routine. This involves an array of different movements, such as bowing, jumping, wing flapping, and or a blend of all three. A crane’s jumping dance is much like my first ever childhood attempt at a backflip off the diving board: an awkward flail into the air that netted no rotation and still somehow ended with me landing feet first into the pool. I’ve yet to see a crane fall flat but give it enough time and I’m sure it could happen. 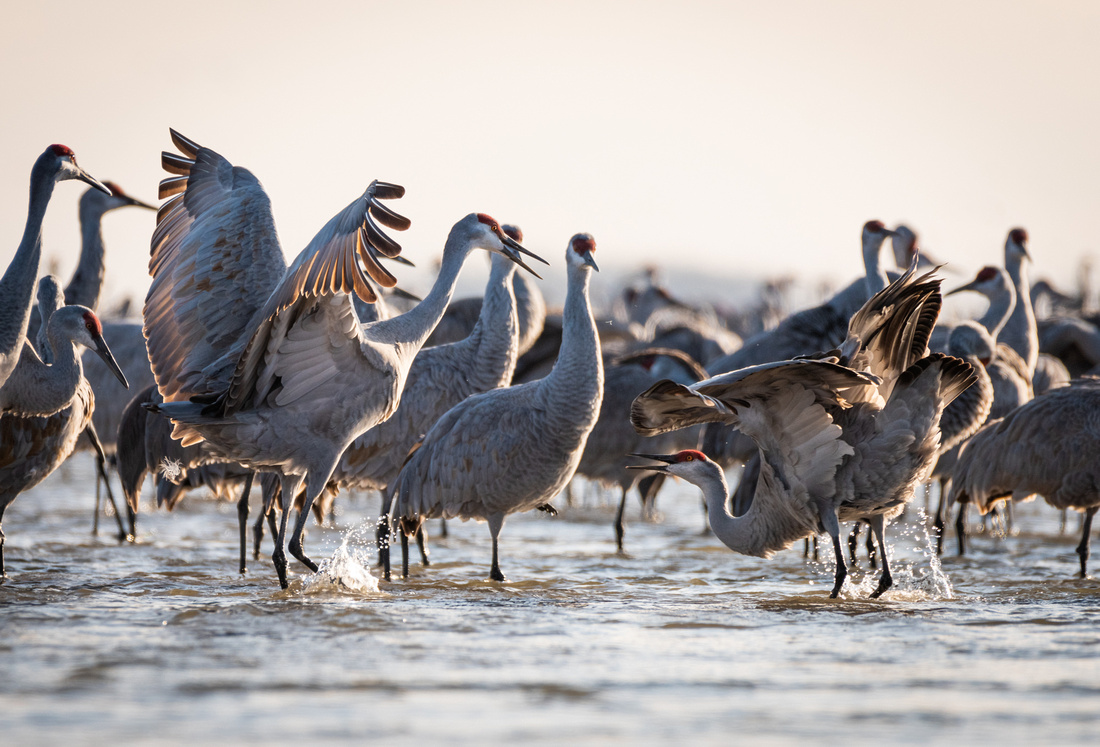 A pair of cranes perform their courtship dance at sunrise 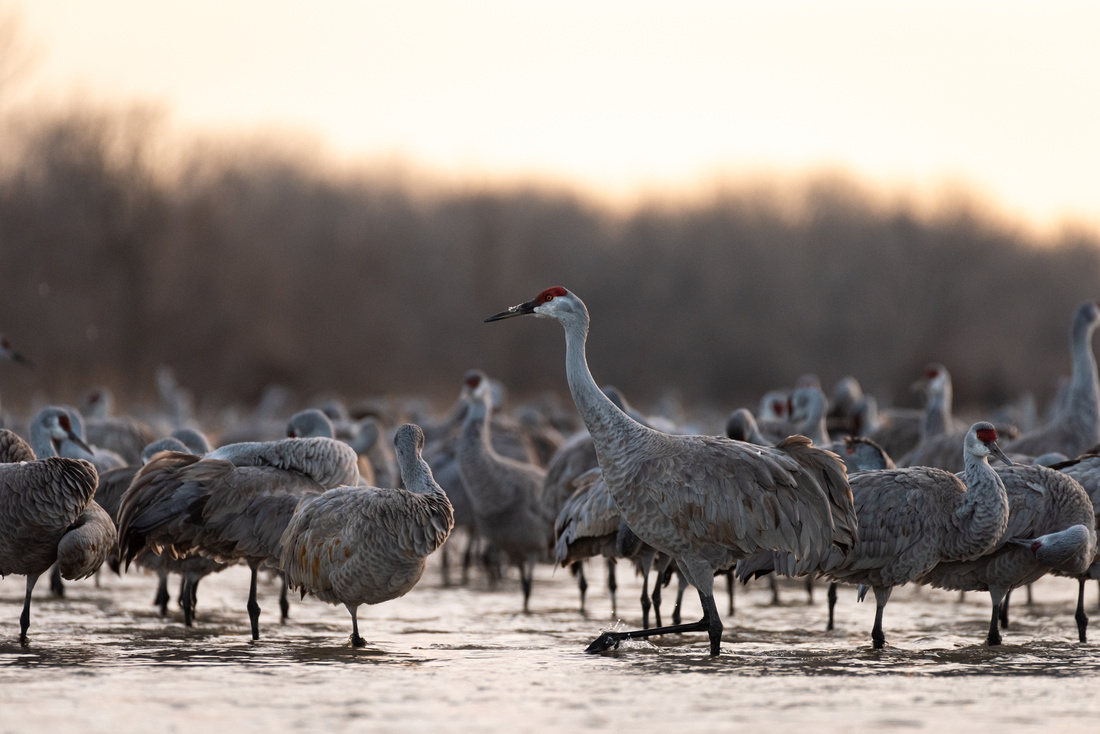 Cranes leave their river roost to head to the surrounding fields to feed during the day – an energy capture they capitalize on before continuing the rest of the way on their long migration. On this dreary morning, groups began taking off one-by-one, until the river was empty with no evidence of the previous night’s commotion. I retrieved the sled and began preparations to return to civilization. 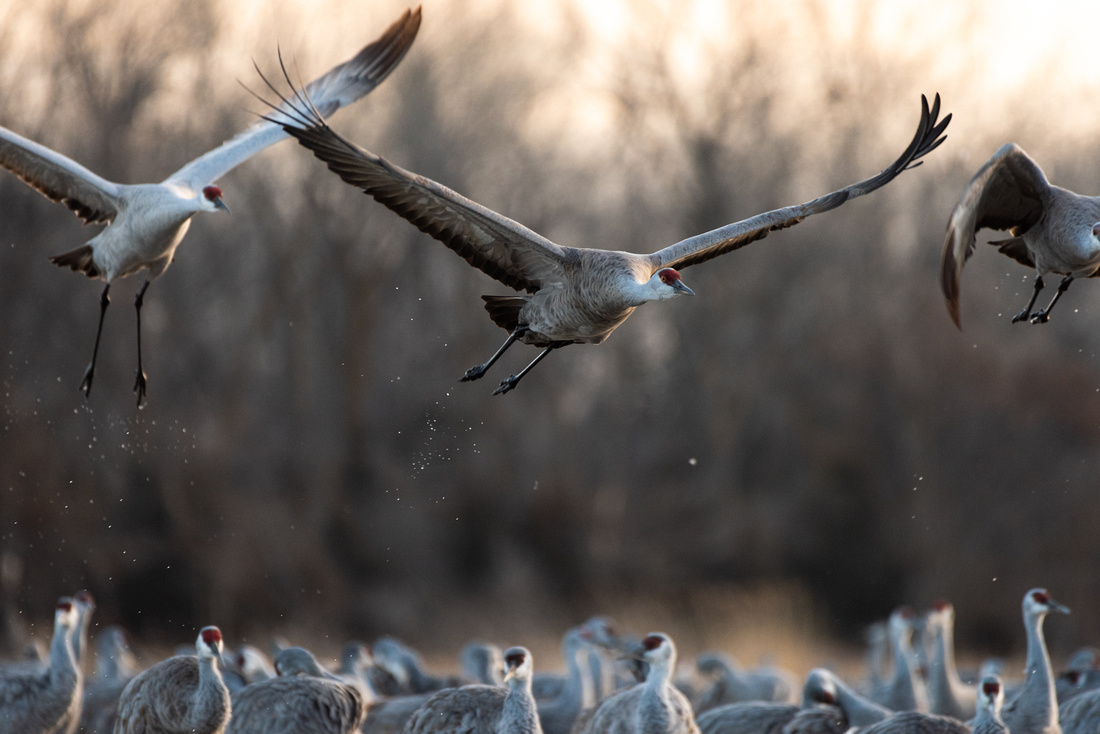 A group leaves the roost, heading to the fields to feed for the day

Whether you’re new to social distancing or perhaps it’s always been a way of life, one thing is for certain: Nature has a way of soothing and providing a healthy escape from reality during these uncertain times. These birds have, and will continue to, make their pilgrimage through Nebraska. Society has, and will continue to, find a way to prevail – and like a crane, always land on its feet, no matter how floundering the jump might seem. 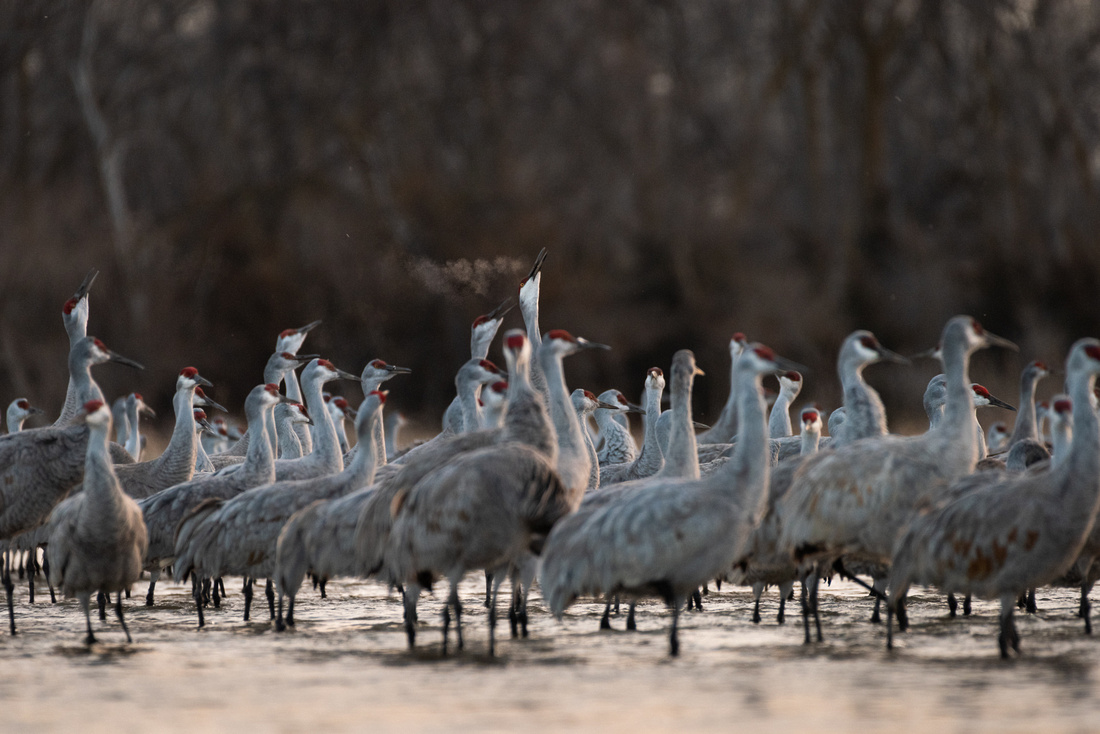 A crane's breath is visible as it calls out 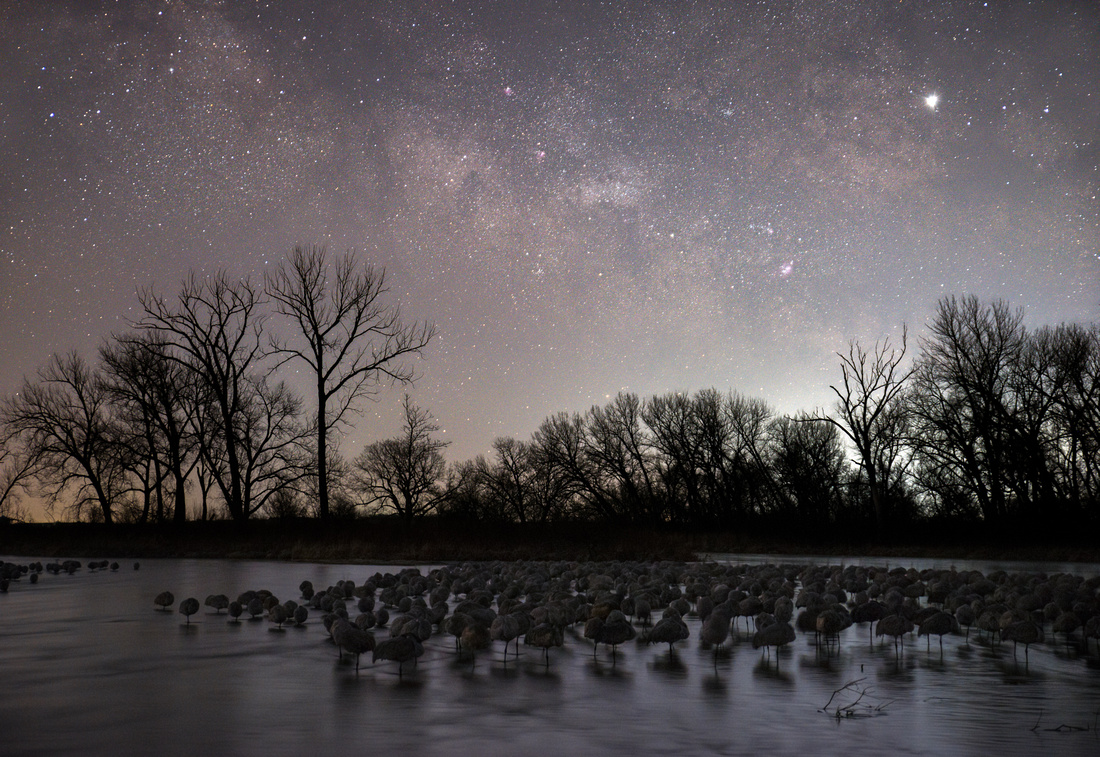 A roost under the Milky Way galaxy

Chad's overnight blind (as well as a more refined cabin) is available for booking - please consider supporting Nebraska ecotourism by contacting him through his Facebook: https://www.facebook.com/pages/category/Cabin/Crane-Cabin-Retreat-1496883456997616/

Chris Masada(non-registered)
This is a wonderful piece, Erik—both the incredible images and supporting story. Very deserving of publication and a wider audience. Congratulations and thanks for sharing.
Jim Mccurry(non-registered)
Wonderful commentary of life on the Platte. We get so wrapped up in our wants and needs while overlooking simplicity with God’s creatures.
Jake Rogers(non-registered)
Beautiful words to compliment the beautiful photography. Great work, Erik.
Dakota Altman(non-registered)
This is an incredible story. One I think so many people need right now. Really wonderful images. The last one with cranes under a galaxy is just to die for. I don’t think I’ve seen anything like it!! This story makes me want to experience them like you have.
No comments posted.
Loading...
Subscribe
RSS
Recent Posts
Sand-barred From Society My Top 10 Favorite Photos From 2017
Keywords
Nebraska Photographer Blind Great Plains Kearney Local Migration Nikon Photography Sandhill Cranes
Archive
January February March April May June July August September October November December
© Erik Johnson Photography
User Agreement
Cancel
Continue